Computers are broadly classified into two categories depending upon the logic used in their design as:

In analog computers, data is recognized as a continuous measurement of a physical property like voltage, speed, pressure etc. Readings on a dial or graphs are obtained as the output, ex. Voltage, temperature; pressure can be
measured in this way.

These are high speed electronic devices. These devices are programmable. They process data by way of mathematical calculations, comparison, sorting etc. They accept input and produce output as discrete signals representing high
(on) or low (off) voltage state of electricity. Numbers, alphabets, symbols are all represented as a series of 1s and Os.

Another classification of digital computers is done on the basis of their capacity to access memory and size like:

I) Microcomputers: Microcomputers are generally referred to as Personal Computers (PCs). They have Smallest memory and less power. They are widely used in day to day applications like office automation, and professional applications, ex. PC-AT, Pentium etc.

II) Note Book and Laptop Computers: These are portable in nature and are battery operated. Storage devices like CDs, floppies etc. and output devices like printers can be connected to these computers. Notebook computers are smaller in physical size than lap top computers. However, both have powerful processors, support graphics, and can accept mouse driven input. 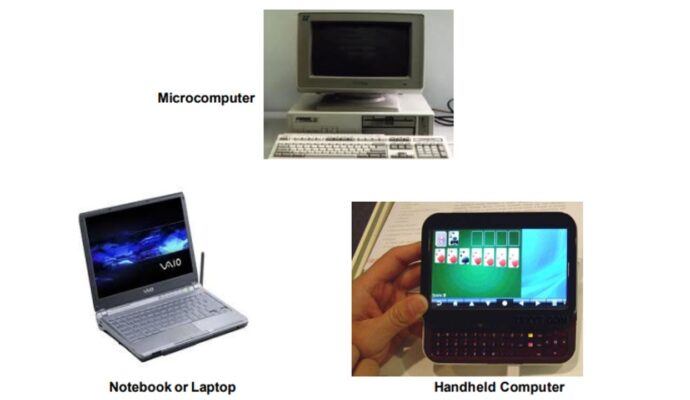 III) Hand Held Computers: These types of computers are mainly used in applications like collection of field data. They are even smaller than the note book computers.

Hybrid Computers are a combination of Analog and Digital computers. They combine the speed of analog computers and accuracy of digital computers. They are mostly used in specialized applications where the input data is in an analog form i.e. measurement. This is converted into digital form for further processing. The computers accept data from sensors and produce output using conventional input/output devices.

Main frame computers are very large computers which process data at very high speeds of the order of several million instructions per second. They can be linked into a network with smaller computers, micro computers and with each other. They are typically used in large organizations, government departments etc. ex. IBM4381, CDC

A super computer is the fastest, most powerful and most expensive computer which is used for complex tasks that require a lot of computational power. Super computers have multiple processors which process multiple instructions at the same time. This is known as parallel processing. These computers are widely used in very advanced applications like weather forecasting, processing geological data etc. ex. CRAY-2, NEC – 500, PARAM.