Computer system is made up of a number of components. These are 1. Input devices 2. Memory unit 3. Central processing unit 4. Output devices 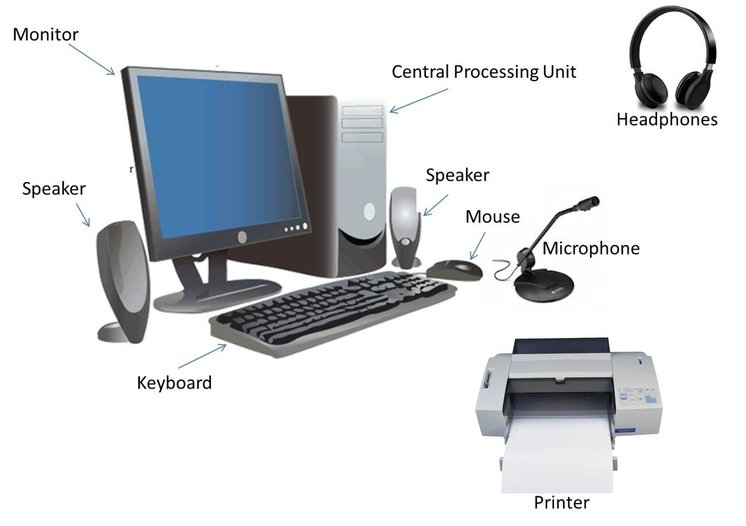 The central processing unit (CPU) is where the actual processing takes place. This is where the calculations are performed and logical functions are carried out. The CPU retrieves its data and instructions from the main memory, processes the data according to the instructions and then stores the results back into the main memory or sends the processed information to the output subsystem. There are broadly three parts of Central Processing Unit. Control Unit controls all the operations in computer. All the arithmetic and logic operations are performed in Arithmetic and logic unit (ALU). A set of registers is used for temporarily storing data or instructions in CPU. It is to be noted that the central processor is controlled by the instructions it gets from main memory. The CPU retrieves and executes these instructions one by one until it completes a given task. Each instruction tells the CPU what to do (add, divide, move, and compare) and also tells it where to find the data to be processed. CPU, memory all other components are connected through buses on Motherboard and are housed in a cabinet or system unit. The bus interconnects the different parts of the Computer so that information can move from one part of the Computer to another. In effects, the bus is a “highway” over which electrical signals can travel. For example when the CPU retrieves an instruction from the main memory the electrical pulses representing that instructions are carried over the bus that connects the CPU and main memory. There are three different types of Buses used in Computer. These are Address bus, Data Bus and Control Bus.

To solve a problem it is necessary to give data and instructions to the Computer. This can be done through input device. The keyboard is an example of an input device that accepts data and translates it into electronic signals. Both program (instructions) and data can be keyed in through it. In addition, certain commands to software can be given from the keyboard.

The keyboard consists of a set of keys. There is one key switch for each letter, number, symbol etc, much like a typewriter. Most common keyboard is called QWERTY keyboard as the alphabets in the first row are placed like commonly used typewriters. When a key is pressed, the key switch is activated. The keyboard has an electronic circuit to determine which key has been pressed. A code is then generated and sent to the computer. For example when you press the alphabet A on the keyboard, it is translated into the electronic code 0100001, which is sent to the Computer. Similarly, the number 0 is translated into the electronic code 00111001. So keyboard is one way to get data into the Computer. Detecting which key is pressed and generating the corresponding code is known as encoding. ASCII (American Symbolic Code for Information Interchange) is one such commonly used code.

Mouse is a pointing device which can be moved on a smooth surface to simulate the movement of cursor that is desired on the display screen. Mouse could be optical; offering quite and reliable operation, or mechanical which is cheaper. User can move the mouse; stop it at a point where the pointer is to be located and, with the help of buttons, and make selection of choices. The mouse is not an alternative to the keyboard for entering data. Text and numbers still have to be keyed in, but selection from menus and drawings are easier with a mouse. There are 2 keys, 3 keys and scrolling facilities available in mouse.

One need to see which key is pressed, and makes changes in case of any mistakes. Whatever one has keyed in gets displayed on the screen of the monitor also known as video display unit (VDU). It is also used to show the Information produced by the computer. Most display screens of a monitor work under the same principle as a television, using a cathode ray tube (CRT). Consequently, the term CRT is often used in place of display screen. There are many ways to classify monitors. The most basic are in terms of colour, its screen size and the resolution. First two types are very explicit. The resolution of a monitor indicates how densely packed the pixel (often expressed in dots per inch) are. In general, the more pixels mean the sharper the image. VGA (video graphics array) or SVGA (Super VGA) monitors are most frequently used Monitors today. Both these terms generally refer to the resolution capabilities of the monitor. Most modern monitor’s can display 1024 by 768 pixels, the SVGA standard. Some high–end models can display 1280 by 1024, or even 1600 by 1200. The older Monitor types were MDA (monochrome display adapter), CGA (colour graphics adapter), and EGA (enhanced graphics adapter). These are now outdated and do not work with newer versions of Windows operating system.